Pepper and Pepper Research in Sarawak

Pepper, the world’s most widely used spice for food flavouring, is the fruit of the tropical climbing vine Piper nigrum L., native to south-western India. In Sarawak, pepper cultivation dates back to 1856 but more extensive planting started in the 1900s.

Today, pepper is one of the important cash crops supporting the livelihood of about 67,000 rural dwellers in upland areas of Sarawak. Holdings are small, averaging 0.2 ha. they concentrate in certain Districts of Kuching, Samarahan, Sri Aman, Betong and Sarikei Divisions. The present estimated planted area is about 13,000 ha.

About 95 % of the pepper traded globally is in the form of black and white peppercorns. The remaining 5% is made up of pepper oleoresin, pepper oil, green pepper and ground pepper.

Pepper vines thrive in warm and wet tropical climate. They are normally grown from stem cuttings, rarely from seeds. The root system is developed from adventitious roots formed at nodes that are buried in the soil at planting. As the vegetative (orthotropic) shoot climbs upward, a simple leaf is produced at each node. A bunch of short adventitious roots also develops to help the shoot cling to the support. At each node an axillary bud grows into a lateral branch (plagiotropic) which eventually bears the fruit spikes.

Flower spikes originate at the node opposite each leaf. Most cultivars have bisexual flowers that are usually self-pollinated. The fruit is a berry, pale green and soft in the early stage, but turns dark green and hard as it matures. The outer skin (exocarp) becomes yellow and bright red and becomes soft as it ripens. Each berry contains a single seed enclosed by a pulpy mesocarp. The commercial black peppercorn is the entire dried berry whereas the white peppercorn is the seed.

Peppercorn owes its pungency to the presence of the alkaloids piperine, chavicine and piperettine. Volatile essential oils give rise to the typical aroma. Together, these compounds constitute the oleoresin that can be recovered by solvent extraction. The spiciness and pungency are influenced by varieties and also the growing locale.

Many cultivars exist in India, the centre of origin of pepper. In Sarawak, the most widely grown cultivar is ‘Kuching’ (Fig. 1). Through research, two cultivars, ‘Semongok perak’ and ‘Semongok emas’ (Fig. 2), have been released to farmers. At ARC Semongok, the pepper germplasm is made up of 47 accessions of P. nigrum and 46 accessions of other Piper species. These materials are used in the pepper improvement programme.

Pepper was first cultivated by Chinese farmers in the early years. Native farmers, mostly Ibans and Bidayuhs, now make up about 87% of pepper farmers, largely through assistance of planting schemes implemented by the Department of Agriculture since 1972.

In Sarawak, pepper is cultivated as a monocrop without shade mainly on gentle to steep slopes. Field drains must be provided if holdings are located in low-lying areas. Vines are planted on mounds, prepared after land clearing. Traditionally, farmers clean weed their holdings. This often resulted in serious soil erosion. Pepper farmers are now encouraged to adopt the practice of using ground cover.

Support
Young vines are trained to climb up a support. Traditionally, belian posts are used but research has found that living posts of certain leguminous trees (Gliricidia sepium and Erythrina indica) are also suitable alternatives (Fig. 3).

Pruning
Vines must be pruned to encourage the formation of a desired canopy. Three rounds are recommended – the first at six months after planting to allow three leader shoots to develop; the second at 12–14 months when the vine has reached half post. The final pruning is done when the terminal shoots have reached the top of the post. The last round usually coincides with the first berry production.

Fertilising
Pepper vines have high demand for nutrients. Application of chemical fertiliser is important to sustain high yield. Liming with dolomite is essential to improve the Ca and Mg nutrition for the vines and to raise the soil pH. Young vines must be fed frequently with N, P and K, the major plant nutrients. Mature vines require substantial N and K. Research on fertiliser need, nutrient composition and fertilising schedule for both immature and mature vines have been done. Symptoms for nutrient deficiencies and toxicities have also been described.

Harvesting and processing
Pepper vines are normally brought to first crop at the beginning of the wet season in the second year of field planting. Harvesting is done from March to August. Black pepper is produced by direct sun-drying of fresh berries harvested from spikes which show early signs of maturity. White pepper is processed by soaking the berries in clean running water to remove their pericarp followed by sun-drying. For this purpose spikes with more mature berries are harvested.

Pests and disease control
Pepper is affected by a host of pests and diseases. The most serious pests that damage the vine and flower spikes are pepper weevil (Lophobaris piperis) and tingid bugs (Dicronocoris hewetii). During storage, peppercorns can be attacked by Cigarette beetle (Lasioderma serricorne).

The most prevalent diseases in pepper are caused by fungi that thrive under our warm and humid conditions. The most common diseases that farmers need to guard against are foot rot (Phytophthora capsici), black berry (Colletotrichum capsici, C. piperis and C. gloeosporioides), pink disease (Corticium salmonicolor), velvet blight (Septobasidium sp.), white root (Rigidoporus lignosus) and slow decline or yellowing (due to combined infestation by nematode, Radopholus similis and Fusarium spp.). Root-knot nematodes (Meloidogyne spp.) attack the roots and wrinkled leaf disease, caused by viruses, affects both young and mature vines.

Protecting pepper vines against the various pests and diseases, largely by chemical means, incurs a significant cost of production in pepper.

MARKETING
About 70 % of Sarawak’s pepper is exported as whole black pepper and the remaining as white pepper, green pepper in brine, value-added pepper and pepper products. In rural areas, farmers sell their pepper to village dealers and subsequently to town dealers. In areas closer towns, farmers sell directly to town dealers or exporters. The Pepper Marketing Board, a Federal Agency formed in 1972, is responsible for market information, promotion and extension, quality improvement, trading, market regulation through licensing of pepper dealers and exporters and product development of pepper.

The major problems and constrains faced by pepper farmers are:

The following are programmes in support of the above: 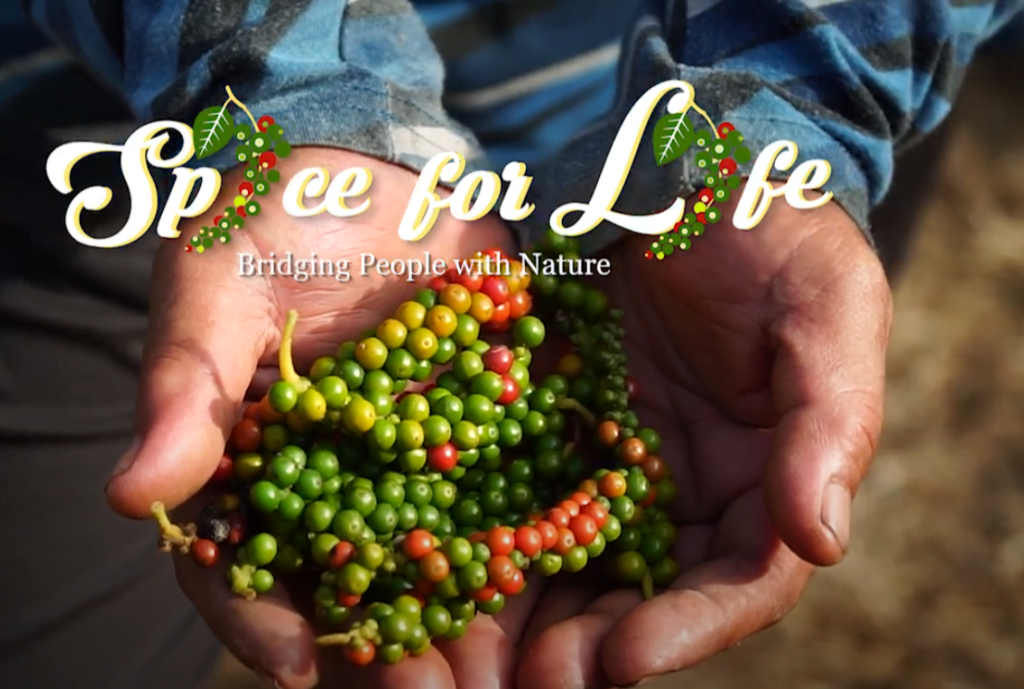 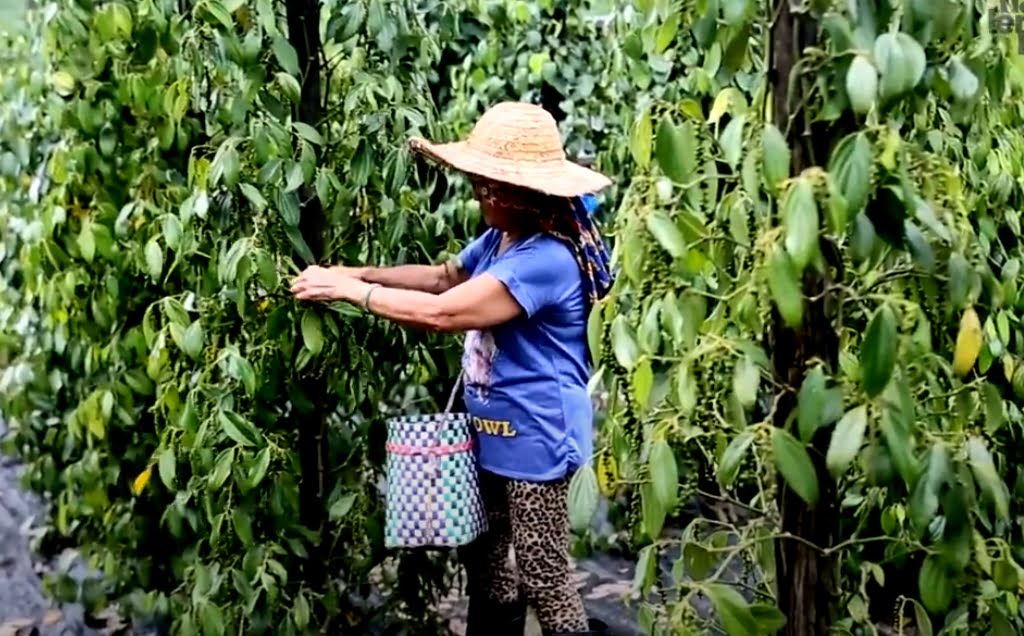 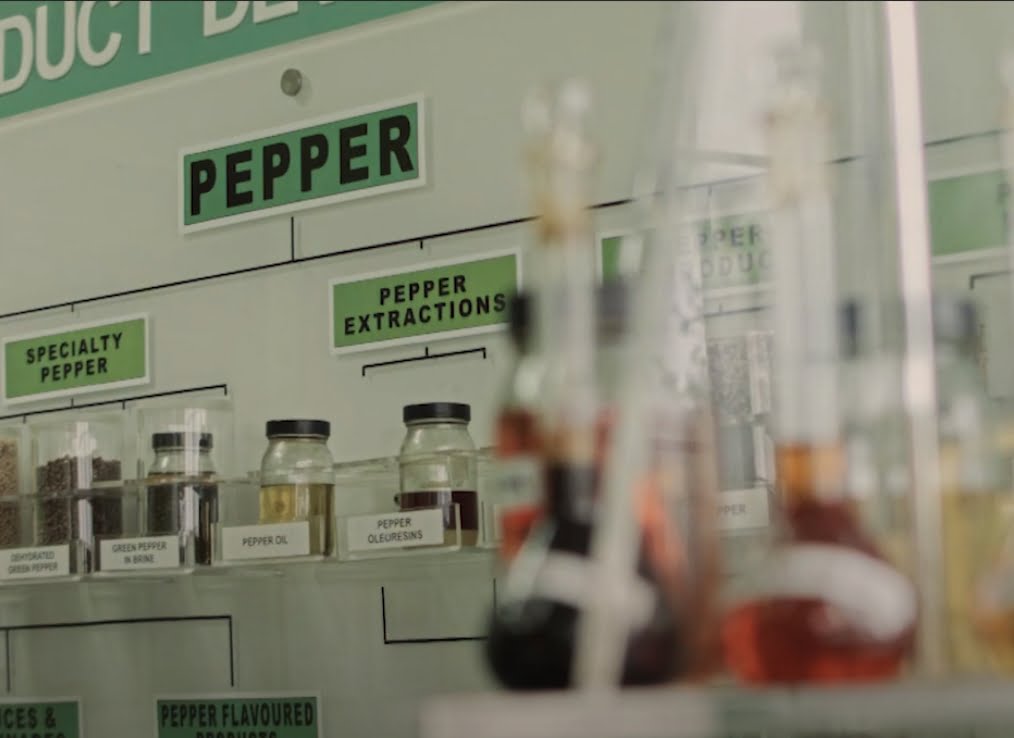 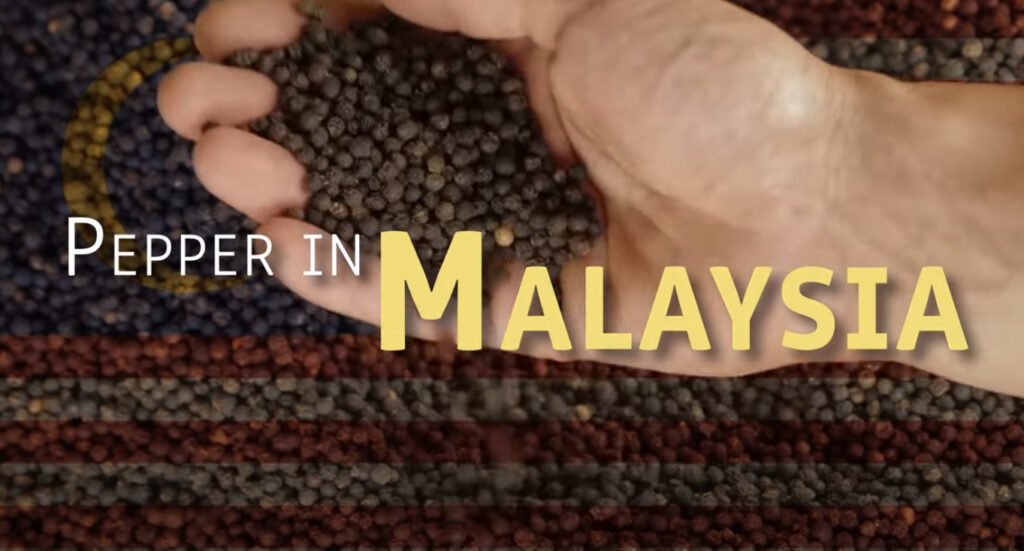